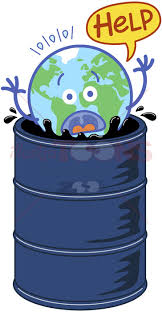 Several weeks ago I was trying to describe to an assistant how significant an oil collapse might be, and why it appeared inevitable to me.

As I sit here tonight in a state of disbelief, oil has indeed collopsed in price to the extent it is anding at minus $37.76 a barrel. That does not mean oil is down $37 – it means that a barrel of oil is trading at MINUS $37.76. This is the kind of thing that rattles your cage and makes you wonder if all is well (no pun intended – because never in history has oil closed at a minus number – never mind such a deep one!

Negative Oil Prices In The Real World.. What?

Translating a negative price of oil into the real world, means technically that if you had a million barrels of oil on a tanker that you needed to unload tonight, not only could you not sell that oil for any price, you would have to pay $37.63 to whoever could take it (though when the futures open later I think the number will be less extreme less). But still, this is a wild situation, and it took the stock market down as well. Here is technically what has happened by way of an example:

If you translated this incredibly upside-down situation right through to a gas pump, imagine pulling into your gas station, where you would be paid $2.50 for every gallon of gas you could take.

If this were the case, we would all probably get pretty creative about figuring out ways to take as much gas as we could – and store it however we could until we could sell it for a profit in the future. Where would you store it? 40,000 gallons in your swimming pool would bring you over $100,000. Would you convert your swimming pool?

Probably a Technical Aberration – But With Dramatic, Real Consequences

This weird aberration (and I hesitate to call it such because this event has likely completely busted some real oil traders and/or firms that trade oil) is due to how futures contracts trade.

ETFs (funds) or trading operations or commodities traders do not plan on keeping their oil contracts through expiration and taking physical delivery of oil. They have bought and sold tens of thousands of contracts before and never had a problem like this – until today!

How Did Oil Prices get to a minus dollar mount?

Today, a combination of events has led to the negative prices, which tonight are being called a technical aberration. Overproduction, a total ‘coronavirus’ collapse in demand, and a steady collapse in prices in past weeks led to everyone wanting to dump the May contract at the same time before it expires tomorrow afternoon. You cannot just toss it in the garbage — you must sell that contract to get rid of it.

That “dump” was probably a panic, where quite simply with no room to store oil, NOBODY wanted to keep their contracts, and you couldn’t even GIVE money to somebodytobuy it from you (unless you gave them $37!

A recovery in the May contract price will likely occur tomorrow, and perhaps end positive, but you must understand that this could feasibly happen again next month with the June contract. The June contract for oil was trading around $20. The US came out an hour ago, also, to say we would be topping off our national reserves, and with a return to sanity tomorrow, we should see prices turn positive again.

Where Will Oil Prices Go From Here?

Oversupply and a collapse in demand creates a perfect storm for any commodity. The tip-off to oil’s future prices can be tracked in the June WTI contract. The real problem is that there is nowhere to store all the excess oil. Like the example of people trying to store gas in their pools were they paid to take gasoline at the pump, however, I am certain we will see some creative conversions related to oil storage take place this month. This should soak up some of the cheap, excess oil out there.

Producing wells cannot simply be “turned off”. It takes time and money to shut in a well, but “Keep your oil for a better day” will be the name of the game in the field. Any way you want to look at it, however, this ‘technical’ price shock will reverberate outwards and dramatically affect ‘real’ people who work in all areas of the oil business.

More importantly, this should be telling you that NOBODY but NOBODY has a handle on what or how this market – and most other markets – can react in the face of our economic slowdow. Try to keep that notion in the back of your mind as you look at other investment opportunities.

Sort by Most recent